It has been too long since my last post -- I have been fooling around with Facebook stuff, along with the PhD thing, and getting The King's Salt launched (a good time was had by all, at least until I began to sing Barrett's Privateers!). On my Facebook page I have posted a couple of interviews, one on CFRC that may yet have an interesting denouement, and one on CKWS-TV that brought in a couple of folks to buy me book!

This month I am returning to boats I have known (Ratty was right). This is an old column that never saw the light of day, so worth showing it here for the first time, slightly updated.

Holy liftin’, the summer of 1963 was a great, hopeful time to be alive. I was thirteen, and I owned a neat, seven-transistor, red, plastic Sony AM radio. The gorgeous girl-next-door was sixteen and she liked me, sort of. Enough to do a little, a very very little, light necking in her basement, at least. I think that was the first time I ever knew the infinite, glorious softness of a woman's breasts in my hands (through a bra and shirt, naturally). My father, a pathologist, said that Strontium-90 levels in milk would soon come down, because the so-called adults stopped air-testing H-bombs that summer.
Gasoline cost forty-eight shocking cents per gallon, but thousands of Canadians, including my family, excitedly un-toggled our duffel coats that spring, to flutter about the country like mating shadflies. We five went car camping, from southeastern Ontario to Vancouver Island. Forty-two years later, there is still only one highway connecting 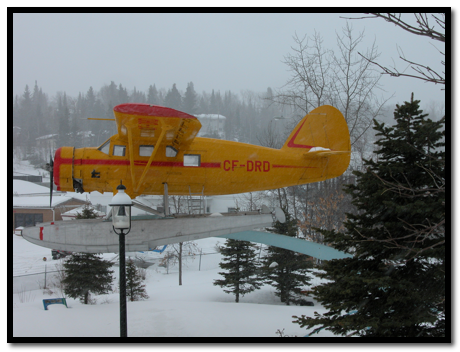 In 2006 less than twenty Norsemen remained flying in the world. Green Airways recently crashed theirs, number 625. A young Ojibway man I met in their Red Lake hangar told me, “We dumped ‘er last year.” No one was hurt - Norsemen are very rugged - and he told me, “We’re bringing the parts out of the bush, wing by wing. Maybe she’ll fly again.”
Six flyable Norsemen still call Red Lake home. Most are muscular workhorses, not showpieces, operating continuously during the brief floatplane season. They truck anglers, hunters and their supplies - more than a tonne at a time - far beyond the domain of wheels. It’s why Red Lake bills itself the Norseman Capital of the World. As we bounced about on the spartan cabin benches of Norseman Number 56, roaring and foaming its long, long way down Howey Bay and into the air, it made me think.
Some Norseman Festivals have seen seventeen of the remaining planes in the flypast. The story of these survivors is like the incomprehensible flight of bumblebees. I can’t think of another technology where the 1935 design still competes effectively with the twenty-first century model.
Earlier in the day I interrupted Chief Pilot Dave Robertson of Chimo Air Services, grinding a lawn mower blade in their hanger. Dave is an affable fount of precise information about Chimo’s two Norsemen, and says they still fill some niches better than any other aircraft. Rebuilt-as-new, they cost a million dollars less than comparable new Cessna Caravans. Robertson makes money operating Norsemen only a couple of hundred hours a year, where newer aircraft have to work 800 hours to pay the bills. Engine costs, too, are far less than newer turbines.
Bolted onto their stubby noses, Norsemen have a nine-cylinder Pratt and Whitney Wasp radial engine. This is a 600 horsepower window-rattler, and hearing that distinctive roar again, I felt even more like I had come home.
I introduced my daughter to Joanne Ivaniski, a tall, soft-spoken A.M.E. (Aircraft Mechanical Engineer), who resembles a 1940s pin-up. Joanne maintained Wasps for five years. She volunteers for the Norseman Festival each July, organizing air events, booking Norseman rides and staffing the street festival booth displaying a cutaway engine, a Wasp Junior, from a Beaver.
She grins and tosses her long brown hair back when I ask about her career, “I love working with my hands, and working on airplanes, and I wasn’t happy being a secretary,” she said. “Most older men don’t think a woman should be an A.M.E., but they go out of their way to make sure I know what they know. You simply ignore the assholes. I do just as well as any of them. I ended up in Red Lake because I fell in love, and my man was here.”
Then, she shifted gears. “The engine core of a radial is maybe a bit more complicated than the turbines I work on now. They stopped making Wasps around 1945, but there are still lots of them around, and there’s a replacement cylinder being manufactured which I hear is pretty good.”
Wasps. I grew up an air mile from Runway 08 at Kingston, Ontario’s airport. Kingston was a Commonwealth Air Training Plan base during WWII, and a Royal Canadian Navy pilot training facility until Ottawa retired Canada’s last aircraft carrier, HMCS Bonaventure.
The Navy and the Royal Canadian Air Force (RCAF) used Harvard aircraft for advanced flight training. In the U.S. the airplanes were known as Texans, but all of them were powered by Wasps. A Harvard snarling overhead at take-off power is ear splitting, unforgettable. With a northerly wind, and students doing touch-and-go circuits over our heads, we clenched our teeth to keep the fillings in. Putty rained down. Mom had to secure the dishes.
Red Lake is a bit like that every summer, when it becomes the Other - the opposite to the winter silence of the great forest. Quiet or noisy, it is also an Other to globalized suburbanality, although ten years after Canada’s last gold rush started here in 1925, it was Canada’s busiest airport.
It’s not everyone’s cup of latte, certainly, but artist Cher Pruys loves it. She paints airplanes, including Norsemen. Cher grew up watching crop dusters in Saskatchewan before moving to Northern Ontario and seeing floatplanes for the first time. She is another pioneer, the first woman admitted to the Canadian Aviation Artists Association. “Norsemen were so important in opening up the north,” she told me, “and the Red Lake Festival is an amazing place to hear the pilots’ stories about this wonderful part of our heritage.”
Our roaring Wasp subsided to a comforting rumbling, and after a gentle descent, the floats of Norseman 56 kissed the water again. As it chugged to silence, coasting to the municipal dock, my daughter removed her ear protection.
“Sweet!” she said, smiling, deeply engraving her father’s heart with today’s all-purpose kid’s phrase of approval. We had touched an ephemeral bit of Canadiana. CF-JIN was delivered to the RCAF in 1941, has crashed and been rebuilt twice, has had nine owners. Her drum-tight, yellow, blue and white skin is only two years old. I hope her iron Wasp heart is still beating, when it’s my grandchildren’s turn to pass this Test. 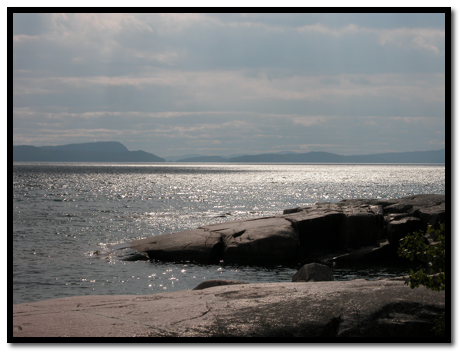 Returning, we tented at Rossport Park on Lake Superior’s north shore, as wild and beautiful a place as anyone can drive to. Plunging off the glacier-scarred granite was like diving into a dry martini straight from the freezer. Splotched on the stone were paint-flat lichens, symbiotic, ancient, and thriving where nothing else can live. We should, and perhaps have, learned from them. Symbiotes only survive when all partners benefit.We are all symbiotes on the Great Turtle's back.
Late that night at the edge of the Big Lake, a couple of meteors shot past Polaris, which the Ojibway call the Bow Paddler. The north was making me think, again. Even falling stars seem different, since Columbia’s fiery rain. Humans are now truly spacefarers, having created stardust of ourselves.
I watched the calm water reflecting the lights of another westbound locomotive as it swung round a headland, kilometers away. Loons were calling, but they were wartime larks in Flanders, scarce heard amidst the howling in the forest. Not of wolves, but of semi-trailer tires pounding the T-Can. Freight trains shook the ground. The east/west trade of a nation of 30 million throbs by within earshot. That there are loons speaks volumes about their adaptability.
Insurance costs are rising, and only eight Norsemen attended the 2005 Festival. Red Lake is right to celebrate them - seventy years ago; the whirling blades of change were Norseman propellers, bringing a new vitality into the north.
Higher energy costs also silenced small town paper mills all around, although our downtown e-culture feeds black spruce forests into mega-mills by the trainload, like magazines of forty-foot wooden machine gun cartridges. Red Lake hangs on. They still mine the richest gold ore in the world here. Ninety-nine percent of Chimo Air’s customers are now anglers from the American mid-west.
Everyone hopes Ontario doesn’t run out of trees, or fish, or American sportsmen. Sure, the gold will run out, but they discovered emeralds, you know, just an hour southeast of Red Lake, by Norseman

Goliath is not sleeping Well, loyal bloggsies, today is rant day against the Big Battalions. A few weeks ago, Boeing (tiny US corporation) charged a Canadian firm, Bombardier, with unfair competition and were awarded 300% tariffs (in an American court -- go figure) because Bombardier had accepted loan guarantees from Quebec and Canada, which Boeing considers to be unfair government support. What is even more chilling is that Boeing doesn't even build an airliner that competes with the C-Series Bombardier aircraft -- they tried to palm off some inferior Air Canada used Brazil-built Embraers on Delta, which they quite appropriately refused. Then Boeing, like the huge crybaby bully they are, went blubbering off to Trump's trade folks, and here we are.    Bombardier Let's take a quick look at this bizarre turn of events. Back in the 1930s, Boeing came out with a twin-engined airliner, pretty much the first of the xx7 line, called the Boeing 247 (photo immediately belo
Read more

David More
David was educated at University of Waterloo (BA History) and Queen’s University (MPA and MA History). He retired in 2011 from a 40-year professional career working in and managing medical laboratories. He is in his 3rd year of a history doctorate at Queen’s University, researching French Canadian mariners’ contributions to the survival of pre-Confederation Canada from 1775-1814. He is also a graduate of the Humber School for Writers, and is an award-winning historical novelist with four books published to date, as well as a commissioned family history. David is a Councilor for the Canadian Nautical Research Society. He has previously served as a volunteer director for the Canadian Olympic-training Regatta, Kingston (CORK), Literacy Kingston, the Marine Museum of the Great Lakes at Kingston and, most recently, for Brigantine, Inc., a charity which owns and operates the brigantine St. Lawrence II out of Kingston as the platform for its traditional youth sail-training program. He is married and has a daughter. David and his wife live in Kingston near the waterfront in an 1850s limestone house that they are “continuously improving.”