Good to be back. I lead off with another gorgeous traditional sailing vessel -- this photo taken by my old friend Chris Howitt at the Bath Tall Ships Rendezvous ten days ago, of the SV Dennis Sullivan out of Milwaukee. This one is a 2000 replica Great Lakes Three-Masted Topsail Schooner -- nicknamed a "Three-n-After" by the old lake salts. They have all been gone since 1934, when the last working schooner, a 60-year-old wooden two-master (fore-n-after) named the Lyman M. Davis, was burned for spectator entertainment on the Toronto waterfront. A year or two before, the Davis had been hauling coal to Kingston and Napanee, reputed to have been the fastest schooner on the Lakes and her last owner was a Kingstonian. In typical Canaydjun fashion, that ephemeral beauty was willfully and deliberately destroyed. Hundreds of her kind had been built on the Great Lakes and many dozens in Kingston alone, but not one finger was lifted to save her. Simple vandalism. 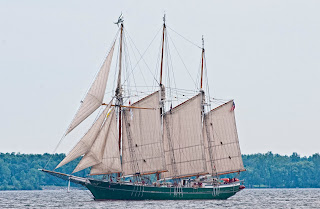 My story today is about the perils of presenting. Anyone who has gotten up on a stage to talk to a group has similar anecdotes about how things can just go sooooo wrong. A history talk I gave a few weeks ago in Cape Vincent, NY, during their War of 1812 History Days gave me my most recent humbling experience.

I did what all good speakers do, arrived early, checked out the sound system and the projector (an HDTV) and connections between my laptop and the TV, which was mounted on its own stubby little legs on a nearby table, with a loudspeaker on tripod stand on the ground immediately behind it. It all checked out, I chatted briefly with the hostess/MC, a very nice local history enthusiast who, she insisted, had an ancestor who had been taken prisoner during the War of 1812, and I headed off to the local Aubrey's Inn, where History Days Organizer Mike Chavoustie holds court, for a frosty Sam Adams or two, to bolster my courage.

Cape Vincent is not large. My voice tends to, er, boom, even without amplification. I have done quite a bit of speaking, one way and another, but rarely has my amplified voice been heard, literally, all over town. So, up I rose at the appointed time and got the first half dozen slides shown, when the enthusiastic local re-enactors (57 tents of them, in total) began musket drill just outside the tent. A few random, warm-up shots were followed by platoon firing as they defended the town from the nasty Brits. I endeavoured nobly to time my slides between volleys, which worked reasonably well for the next couple of dozen slides. One listens for the commands, you see!

Having successfully repelled the iniquitous British, the infantry left the field, the smoke cleared, and I had just begun to relax and dig into the meat of my story again, when fate served up the next challenge on my plate. Cape Vincent is, of course, a lovely little resort and port town on the St. Lawrence Seaway opposite Kingston. In summer, one can watch the 25,000-tonners parade majestically up and down within little more than a stone's throw of my presentation tent, carrying their wheat and iron ore. Just as I was declaiming about the heroics of the French-Canadians hauling arms, ammunition and the materiel to build two entire warship flotillas up the St. Lawrence during the War of 1812, one passing freighter must have had some errant boater lollygagging in its way, in the (very) narrow Seaway Channel. For whatever reason, the master let loose a 90-second blast on his ship's horn that effectively drowned out even me and my amplified shout, never mind Cape Vincent's volunteer Fire Department sirens and all the dogs in town who began to bark. I had to give up, laughing.

All things pass, however, and I plunged heroically on, now with a bit of hysteria in my voice, I am sure, attempting desperately to recover the attention of my now understandably scatterbrained audience. I got within a few slides of concluding, when a sudden, errant gust of wind sifted silently in through the back of the marquee to my left. It lifted the heavy canvas tent skirt like Marilyn Monroe's fabled dress, and blew it onto the tripod-mounted speaker, which naturally swooned at this surprise assault from the rear, toppling over onto the HDTV, taking it, too, down to the ground from its table, and cracking the screen into perpetual uselessness. Agog, I could only stare in simple, dumbfounded amazement, as the (newly-purchased) HDMI adapter in my laptop was bent 90 degrees amidst all the trailing cables and cords and gasps of concern from the audience. Once again, my slide show ground to a halt. After a brief diagnostic glance at the TV (CSI-dead), I then lifted my chin and stubbornly, dauntlessly carried on, now bereft of visual and audio support, I ended my presentation to some surprisingly warm applause. Perhaps they felt I had laid all the other entertainment on, too!

Several participants came up to talk to me, along with the MC, dear soul, who had this time brought along several pages of written documentation she was pointing to, about her ancestor's tribulations -- I must have seemed inadvertently skeptical earlier -- and the A-V guys, who had previously informed me that they needed to move the sound system as soon as I was done. So, there I was, haplessly attempting to carrying on two conversations at once, while the technician growled at me to lift my foot -- no the Other foot -- as they attempted to take the whole tangled mess away.

I managed to survive it all, dignity once more bruised, and needed another brief visit to Aubrey's Inn before I left the Cape. Poor Mike had loaned the TV to the event, but was philosophical - "Aah it was a couple of years old -- probably obsolete anyway," he shrugged. Cape Vincent is lucky to have him.

If you wish to purchase any of my books, go to:

Caption: note new (white) sidewalk under lower window  You Can Fight City Hall (long read) Until recently, I’ve never had a particular fight with City Hall, or government in general. Yes, of course it is true that they frequently get things very wrong, they waste dreadful sums of money that is not theirs, they are often deaf to individual cries for help from citizens and customers. But, you know, so do Enron, and Exxon and Nortel and … the list goes on and on and on. Enough mud for pot and kettle all around, IMCO. But a year ago, I ran up against complete and utter failure of, first, competence, and then ethical behaviour at the municipal level that woke me up because it slapped my wife and I personally right in the face. With your patient forgiveness, I’ll tell you about it. 30 years ago we bought an old house in Kingston – a two-story semi-detached built in 1856 out of limestone – a familiar building material in Kingston. In Charleston or Savannah the p
Read more